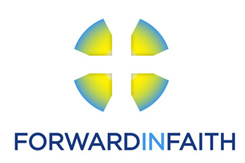 Bishop Tony Robinson is the Bishop of Wakefield in the Diocese of West Yorkshire and the Dales. He has been Chairman of the Council of Bishops of The Society since 2013 and was elected Chairman of Forward in Faith at the 2014 Assembly. He is also Chairman of the Additional Curates Society.

Bishop Tony was born and educated in Bedford. He taught mathematics and computer studies in a comprehensive school in Chelmsford before training for the priesthood. Since he was ordained, he has worked in parishes with significant ethnic communities. His first parish was S. Paul the Apostle, Tottenham. He then moved to Leicester to a large team parish working alongside three other clergy and three Sisters, where he helped establish four community projects, including an innovative project working with men who had committed domestic violence. The parish embraced a wonderful mix of peoples, including the largest Hindu community in Britain as well as people from other faith communities.

Bishop Tony moved to West Yorkshire in 1997 to work first as the Archdeacon of Pontefract and then from 2002 to 205 as the Bishop of Pontefract.  He became Bishop of Wakefield in 2015. As well as sustaining the church family, his passion is to encourage the Church to look outwards, to be involved with its local community, to improve opportunity and understanding and work towards a more cohesive common life.

His commitment to working with all communities in the area means that he has extensive interfaith involvement. Urban, multi-ethnic and multi-faith have been themes of Tony's ministry. He is currently chair of Kirklees Faiths Forum, co-chair of North Kirklees Interfaith Council and a founder member of Interfaith Kirklees, which works with schools to provide education and promote community cohesion. He co-ordinates regular meetings between clergy and local imams and scholars and is working on a project to develop exchange visits of Christians and Muslims between Kirklees and Pakistan. Nationally, he chairs the Archbishop of Canterbury's Pakistan Focus group, which supports relationships with the Church in Pakistan, and Presence and Engagement, which supports the Church's mission in areas with large ethnic communities. He is also Episcopal Adviser to the Church of England's World Development Advisers Network.